We had a couple of hours at the Auckland Domain yesterday, it’s peek fungi (is that a thing? It is now…) everywhere we go it’s easy to spot.

It looks like a regular tree filled park….but underfoot it’s a wild and exciting world, fungi are busy composting and fruiting away.

I have been reading up on fungi, this book from the library, Fungi, by Roy Watling is a good resource, with clear explanations of how how fungi works/lives, and it’s essential role in our environment, as well as useful tips and suggestions on collecting, studying and learning about fungi around us. It explains how to make spore prints from fungi:

We gave it a go yesterday. It’s very simple, we used a plastic container we had our lunch in, and carefully collected a number of small specimens from underneath four trees in the park, taking care not to over handle the ‘shrooms, Luna and I dug some up with their stems and some roots intact.

A bit of a jumble on paper at home…but they were ok!

How beautiful are these two? 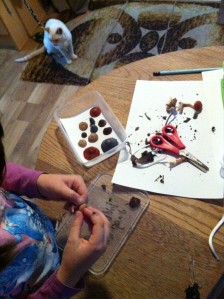 Once you have the specimens home, carefully trim or twist the stems off the caps, and place them gills (on the underside of the caps) down on some paper. We used cartridge paper from a sketch pad. 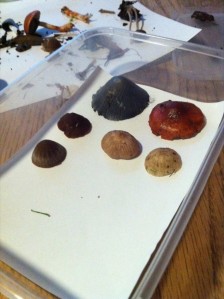 The ink caps (top in the photo above) were already releasing some spores, and were ‘inky’ as their name suggests.

The guidelines for making the spore prints say to leave the caps with a cover to rest for 12 hours, we used a plastic takeaway container with a lid, and left it over night, so a few hours longer than recommended. It was very exciting for Luna to carefully remove the caps with her tweezers this morning to reveal the prints! 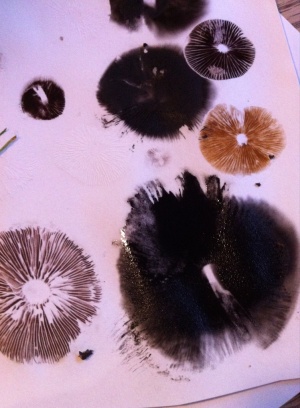 Looking through the paper from underneath (light above):

One species made white prints, the ink caps made wet and inky prints (I think they could do with less time to produce a finer print) and two others made brown-orange prints. 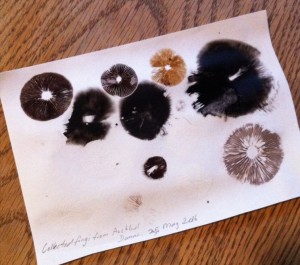 It has been interesting to see how more easily Luna (and I) can identify the different species, it’s really through careful handling and close up study and dissection that knowledge is growing. We are planning to make spore prints from fungi in other parks we visit.

Some things to keep in mind:

Safety – we can identify some of the more poisonous varieties now, but to start with we would not touch an unknown fungi with our hands, use sticks, trowels gloves when handling.

Collecting additional data – some fungi are intimately associated with certain trees, so make a note, or pick a leaf from a tree you are collecting fungi from under. This may help identify the fungi and add to understanding the ecology of the area.

View all posts by Angela Rowe