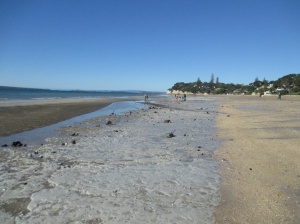 An ancient forest has recently been exposed on Auckland’s Takapuna beach, it’s really exciting, making news. There is the well known fossil forest at the north end of the beach, which you can read about in this paper, Fossil forests preserved in volcanic ash and lava at Ihumato and Takapuna, Auckland….

But this is something different, a bizarre landscape from another world.

We had to investigate, we had a lovely day at the beach and took loads of photos… 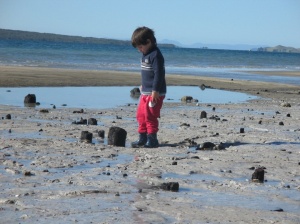 The ash mud was very slippery and I loved the texture, as you can see below, this forest has had many visitors! 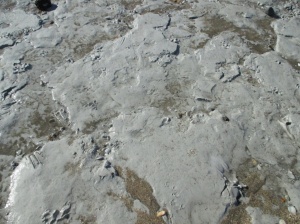 When I heard about it, I imagined that the remains of the trees would be like rock, that they had been fossilised, but they felt just like wet, rotting wood. We discovered many small tree stumps emerging from grey mud, from volcanic ash, it was like the trees were marching off into the sea.

Fascinating. These, below looked like roots, and appeared larger than the other tree remains we saw.

The meeting place, we could see where the sand had washed away and stumps were exposed in the sand as well as nearby mud.

This is more like what I expected to find, tree remains in rock. 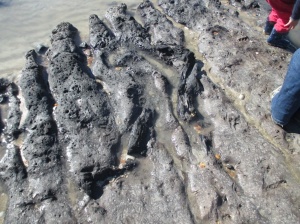 Other finds at the beach, a dead flounder.

Blake wanted to put it in water, just in case.

Local geologist Bruce Hayward shared this information about the ancient forest on Facebook:

In recent days the sand near low water in the middle of Takapuna Beach. Auckland, has shifted and exposed the long buried remains of an ancient forest. Many long-time locals say they have never seen it before, although some of the soft sticky mud that it is buried in has been uncovered in other parts of the beach on odd occasions in the past.

Auckland geologist Bruce Hayward visited the newly exposed fossil forest this week. “This is an exciting new discovery and is quite different and much older than Takapuna Reef’s famous fossil forest preserved in the lava flows from Pupuke Volcano”, he says.

“This new fossil forest consists of many small tree stumps in growth position in an ancient soil. It is clear that the trees became established on the surface of a thick white rhyolitic ash deposit, and in turn they have been buried and preserved by another thick creamy-white volcanic ash bed”. Similar thick rhyolitic ash and ignimbrite deposits occur in a number of low-lying parts of Auckland. Elsewhere they have been dated at close to 1 million years old and were erupted by gigantic explosive blasts from a volcano in the vicinity of Whakamaru, near Taupo.

A similar sequence of white volcanic ash and peat occurs in Shoal Bay and was exposed a few years ago by earthworks when the Esmonde Rd interchange for the northern motorway was being enlarged. Similar aged fossil forests are permanently visible in eastern and southern Auckland in low sea cliffs at Pakuranga, Takanini and Waiuku.

“The fossil tree stumps and fallen branches and twigs are black, but they have not been burnt” says Dr Hayward, “instead they have been carbonised during their preservation and fossilisation. A specialist could study their cell structure and identify the kinds of trees present. Most of the trees are small and less than 15 cm diameter, but larger trees were in the neighbourhood as I found a large lump of kauri gum with the ancient soil.”

In places the volcanic ash has weathered to clays and is soft and sticky but in some places it has been hardened by remineralisation and some of these rocks stick up 30 cm above the present beach level.

History tells us that it will not be too long before the sands shift back and once again bury Takapuna Beach’s hidden secret – the oldest fossil forest on the North Shore.

View all posts by Angela Rowe